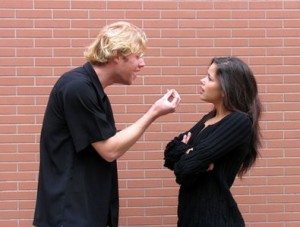 The varieties of people’s wickedness are manifold. As a result of their refusal to tolerate the sense of their own sinfulness, the evil ones become the uncorrectable grab bag of sin. They are, for instance, in my experience, remarkably greedy people. Thus, they are cheap- so cheap that their “gifts” may be murderous. In The Road Less Traveled, I suggested the most basic sin is laziness. In the next subsection I suggest it may be pride –because all sins are repairable except the sin of believing one is without sin. But perhaps the question of which sin is the greatest is, on a certain level, a moot issue. All sins betray – and isolate us from – both the divine and our fellow creatures. As one deep religious thinker put it, any sin “can harden into hell”:

There are analogies in human experience: the hate which is so blind, so dark, that Love only makes it the more violent; the pride which is so stony that humility only makes it more scornful; the inertia – last but not least the inertia – which has taken possession of the personality that no crisis, no appeal, no inducement whatsoever, can stir it into activity, but on the contrary makes it bury itself the more deeply in its immobility.

So with the soul and God; pride can become hardened into hell, hatred can become hardened into hell, any of the seven root forms of wrongdoing can harden into hell, and not least that sloth which is boredom with divine things, the inertia which cannot be troubled to repent, even though it sees the abyss into which the soul is falling, because for so long, in little ways perhaps, it has accustomed itself to refuse whatever might cost it an effort. May God in his mercy save us from that.*

A predominant characteristic, however, of the behavior of those I call evil is scapegoating. Because in their hearts they consider themselves above reproach, they must lash out at anyone who does reproach them. They sacrifice others to preserve their self-image to perfection. Take a simple example of a six-year-old boy who asks his father, “Daddy, why did you call Grandma a bitch?” “I told you to stop bothering me,” the father roars. “Now, you’re going to get it. I’m going to wash your mouth out with soap. Maybe that will teach you to clean up what you say and keep your mouth shut when you’re told.” Dragging the boy upstairs to the soap dish, the father inflicts this punishment on him. In the name of “proper discipline” evil has been committed.

Scapegoating works through a mechanism psychiatrists call projection. Since the evil, deep down, feel themselves be faultless, it is inevitable that when they are in conflict with the world they will invariably perceive the conflict as the world’s fault. Since they must deny their own badness, they must perceive others as bad.

In The Road Less Traveled I define evil “as the exercise of political power that is, the imposition of one’s will upon others by overt or covert coercion – in order to avoid…spiritual growth. (p.279)

Strangely enough, evil people are often destructive because they are attempting to destroy evil. The problem is that they misplace the locus of the evil. Instead of destroying others they should be destroying the sickness within themselves.