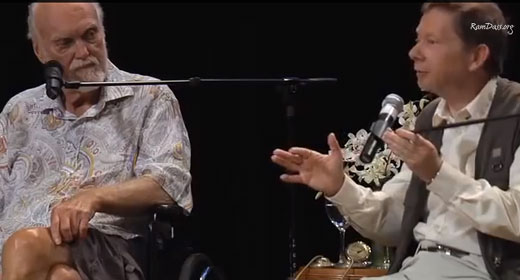 Ram Dass, a master spiritual teacher died on December 22, 2019.  In 1998, he experienced a massive stroke that left him with a speech impediment. Instead of collapsing into a place of suffering, he said he was “stroked” by God. He embodied everything he taught. The simple — yet difficult to obtain—teaching he is most known for is: “Be here now.”

In 2011, Eckhart Tolle was listed by the Watkins Review as the most spiritually influential person in the world.

Eckhart Tolle offers wonderful advice that focuses on mindfulness and letting go of the ego. He is a huge advocate of living in the now, as witnessed by his book: “The Power of Now.”

The following are quotes from Tolle: “Time isn’t precious at all, because it is an illusion. What you perceive as precious is not time but the one point that is out of time: The Now. That is precious indeed. The more you are focused on time—past and future—the more you miss the Now, the most precious thing there is.”

“Don’t let a mad world tell you that success is anything other than a successful present moment.”

Over the past several decades, we have been exposed to thousands of teachings via teachers of many traditions and various levels of spiritual development.

We seem to be living numerous lifetimes this time around because we have nearly anything available to us at the reach of our fingertips. We can research, learn or become anything. This creates a lot of doing and not being. We can do for the rest of our lives, but who is just being in the moment and truly present with oneself and others? Oddly enough, it’s rare.  It’s commonplace these days to have others look at their phones while we’re in a conversation. Just a decade ago, it was considered rude behavior. We are acclimating to not being present with others, nor have others be present with us.

Did you ever get the feeling when talking to someone on the phone, that they are doing something else while you’re in a conversation? Maybe they’re checking their emails, cooking, or making a pot of tea, even holding a conversation with others in their environment? How does that make you feel? Unimportant? Ignored? Or, do you chalk it up to the way people are these days?

I have noticed that there are so many folks out there sharing their stories, sometimes deep and intimate details in social networks. Could it be that they are looking outside their families, friends, and counselors because those people aren’t present enough? People everywhere are pouring out their hearts and publicly sharing information about their traumas.  I used to think this is good, that there is a “washing” going on and it’s purging the trauma.  I don’t think this is as true as I once thought. I think there are people getting stuck in their stories.  Social media conditions our brains to get validation through likes and others who respond. There is a psychological payoff that is causing the trauma to perpetuate and keeps the person who’s been victimized in a recapitulation loop.

There is a saying: “Don’t get pulled into other people’s storm, pull them into your peace.”

How does one get unstuck from the past and truly move forward into the Now?

I will cover that in the next newsletter.